"I have been ordering Blaud's pills for fifteen years and have noticed astonishing results in the majority of cases. I prefer them to cod liver oil and wine of iron. Begin with three or four pills a day, and increase the number just as soon as you are able." Dr. von Brausepulver
(Wedekind The Awakening of Spring) 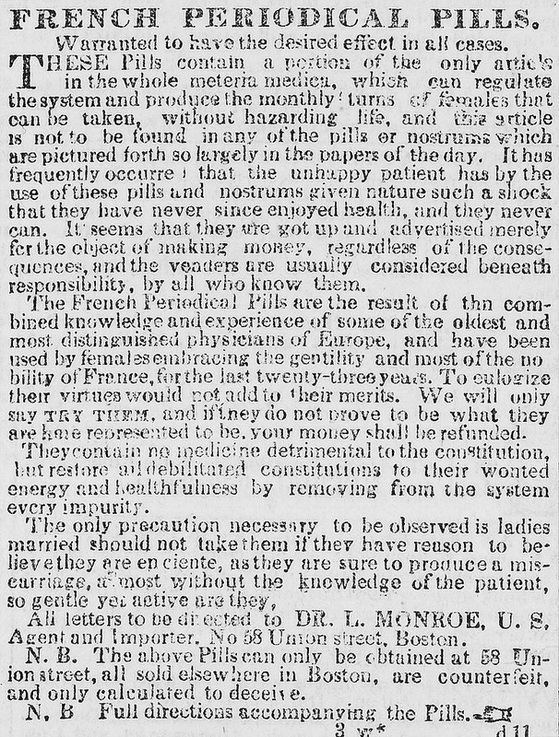 Technically, abortion is legal. But the arguments around it have not decreased in volume since Roe v. Wade legalized abortion in 1973. On top of the legal and political yelling that is going on, pop culture seems to glorify teen pregnancy. Shows such as 16 and Pregnant, Teen Mom, and the Secret Life of an American Teenager give attention to teen mothers. Technically Wendla could have obtained an abortion today. Indiana required parental consent from one parent for a minor to get an abortion, and Wendla’s mother surely would have agreed. But contemporary abortions can seem just as furtive and shameful as the back alley procedures of the 19th century. It would be easy to say that because abortion is legal today we don’t have to worry about situations like Wendla’s. It would also be naïve.

Today, it may seem absurd for Wendla to believe the doctor when he tells her she has anemia. For a girl who does not even understand how she came to be pregnant, it is much more understandable. Additionally, the diagnosis of pregnancy was not as exact in 19th century Germany as it is today. It was easy to confuse such illnesses as dropsy with pregnancy. Thus people who were pregnant could be told they were simply sick, and the opposite was also true. While the teenage pregnancy rate has dropped in the United States in the last two decades, the U.S. remains highest in teen birth rates when compared to countries such as Australia, Canada, France, Germany, the Netherlands, and Japan. Reasoning for lower teenage birth rates in these countries include better education and easier access to contraceptives and a social acceptance of sexuality. In 2010, nine percent of births were to teenagers. Many of the problems regarding teen pregnancy, as well as sexuality, that appear in Spring Awakening can be seen mirrored in contemporary America. It’s easy to explain the issue of teen pregnancy in terms of statistics and research. It is also important to remember that often teenagers live in the here and now rather than in the future, and when all those feelings are new, it’s easy to get carried away by them.

Wendla’s doctor prescribes pills after her diagnoses, presumably pills with abortive powers. The musical version also follows Wendla’s mother arranging and sending her daughter to an abortionist. Both methods would have been feasible at the time, and both would have been illegal. Wendla’s mother herself faced up to two years in prison for her involvement as any person who caused a pregnant woman to abort without her knowledge could be prosecuted. As Wendla did not know how she became pregnant, it is not likely she really understood where her mother was taking her when she went for the abortion. The only time abortions were allowed under German law was for medical emergencies and to save a woman’s life. Despite this, abortions still occurred. Noble women who had more open access to abortions, and funds to pay for them, rarely delivered illegitimate children. Lower class women however, often had to resort to folk remedies, like the pills in Wedekind’s original work. At the time, at least in Canada, up to 1/6 of all pregnancies ended in “forced miscarriages.” Abortion remains as hot-buttoned an issue today as ever. The recent reduction of funding for institutions such as Planned Parenthood because of their relationship with abortion is just one recent example. Wendla’s situation seems to be demonstrating the danger of abortions being illegal. After all, history has proven that despite the law women will often attempt to secure abortions. Often, these ways could be extremely dangerous for the woman involved. It seems even worse for Wendla, a girl that not only does not know what is going on, but is separated from the mother who promised to stay with her during the ordeal.

The end of the 19th century was a curious in-between time where modern medicine began to be favored over folk remedies. Yet, the folk remedies in terms of abortions still persisted as well. German folk medicine tended to favor the use of plants like the root of worm fern, thyme, parsley, and lavender in tea form. The modern age also gave rise to the use of substances such as turpentine, caster oil, Epson salts, ammonia, and opium as abortants. There were the physical acts of extreme exercise, heavy lifting, hot baths, jumping, and shaking. Additionally there was the use of pills that would hazard against use if pregnant, often cleverly advertising in that way.

Then, as seen in Spring Awakening there were abortionists. Not all women would see abortionists right away. Many would first enlist the help of their friends and family in terminating a pregnancy, friends and family that had no clue what they were doing. When this failed, the name of an abortionist was most often secured through a female, word-of-mouth network. They were also known to advertise in code like the following:

One trip to an abortionist was often not enough, with 2-3 visits average to terminate a pregnancy. Spring Awakening shows Wendla visiting a male abortionist. This choice could be explained simply as a staging necessity, as Wendla’s mother takes up the only adult female actress the show employs. Yet, it also exists to foreshadow Wendla’s fate. Female abortionists were generally preferred, and there were not many male abortionists in practice. While Wendla’s mother’s choice could have come down to a matter of money, it was believed men abortionists were not as reliable because they did not understand the female body as well as a woman. Regardless of the gender of the abortionist, the procedure was fraught with peril, as witnessed by Wendla’s death. Wendla’s gravestone reads that she died of anemia, which is what her doctor prescribed her with to her face. However, in light of her trip to an abortionist, it is likely that she died from bleeding caused by the abortion.

Abrams, Lynn, and Elizabeth Harvey. Gender Relations in German History: Power, Agency, and
Experience from the Sixteenth to the Twentieth Century. Durham: Duke UP, 1997. Print.