"For heaven's sake, Wendla! Papa would beat me black and blue, and Mamma would lock me up in the coal hole for three nights." Martha
(Wedekind The Awakening of Spring) 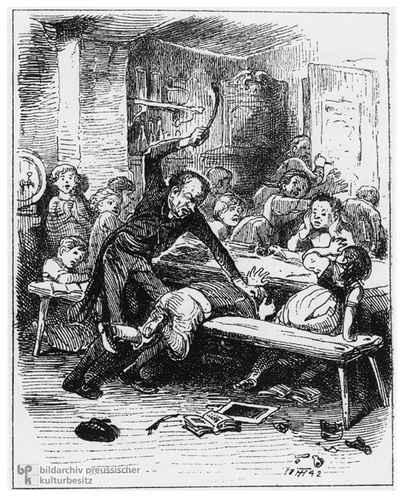 A teacher giving a beating in a Germany elementary school circa 1842.
The number of deaths per day related to child abuse rose to five plus in 2010 compared to approximately three a day in 1998. Today, 9.2% of children are sexually abused. Over 90% of children and adolescents who report sexual abuse knew their abuser in some way. The idea of abuse plays heavily into Spring Awakening with both the acknowledged abuse of Martha and Ilse, and Wendla’s subsequent decision that she needs to be beaten to feel (although some of that crosses over to sexuality). The level to which abuse existed in Germany at the time further helps construct the dark, terrifying world the adolescents are living in within these scenes. Martha does not want to talk about her abuse. It is the other girls that latch on.  She, and Ilse, can only open up about this experience through their internal monologue of song. Even then, they cannot refer to it by name. This fits with the feelings of isolation and utter helplessness that being a survivor of abuse can often bring. Especially in a world where physical abuse was readily accepted, these girls would have felt utterly devoid of any ability to change their own fate. Even their song is about them suffering in silence, betraying a certain amount of resignation to their fate.

When told by their friend Martha that she is being beaten, Wendla Bergman and friends express an appropriate, and modern, degree of disbelief and horror. Yet, Thea’s assertion that, “My Uncle Klaus says, ‘If you don’t discipline a child, you don’t love it’,” rings a lot closer to home for 19th century Germany. Indeed, Germany would be referred to as a “child-thrashing nation.” Recalling Uncle Klaus, one German said, “Children can never get enough beatings.” These beatings then continued at school. Fear of such beatings, at home and school, was a leading cause in the increase of school suicides during the period. Corporeal punishment was accepted in Germany through the 1960s. At the beginning of the 20th century, a study reported 89% of German parents admitting to beating their children, most often with implements such as canes, whips, and sticks. In the 19th century, it was not only Germany that turned a blind eye to the beating of children, as a form of discipline or otherwise. Before 1880 in France the only crimes that existed against children were abortion and infanticide. Therefore, anything up to death was not punishable by law. While not accepted today like it was in Germany at the time, the sad fact is child abuse still exists. Neglect is the most common form of child abuse reported today. However 17.6% of children suffer from physical abuse.

A December 1892 entry from the journal of Frank Wedekind (the author of the original Spring Awakening) offers the following nonchalant glimpse into domestic abuse.

“Am up and about by nine, put Schwigerling under my arm, and drive to Frau Gotthelf’s. Her husband receives me in the drawing-room. He’s short and stout, with a puffy red face, pouting lips, and a rather furtive look. He invites me to come more often. His brother-in-law, Lewis, told me he was a monster, gets drunks every day, comes home and beats his wife and children, doesn’t contribute a sou to the household expenses, and had allowed the youngest of his children literally to starve to death. I read the first act to Frau Gotthelf in the dining-room.”

Wedekind wastes no more time contemplating the horrors he has recorded. At this point he had already written Spring Awakening. The same entry even goes on to record Frau Gotthelf making recommendations of to who he should introduce Spring Awakening, and offering her own connections. Yet, he offers no more thought to this woman’s domestic plight. There is judgment in calling her husband a monster, but also acceptance that this is normal in the fact he does not analyze it further. It mirrors the reactions of the girls in Spring Awakening. After expressing horror at the situations of Martha and Ilse, Wendla tells Melchoir she “has never been beaten,” implying it is not a unique occurrence. While this can also be attributed to a youthful naiveté, there is recognition there that beatings are more commonly accepted in the world of Spring Awakening than in society today.

The song “The Dark I Know Well” also contains allusions to sexual abuse for both Martha and Ilse. While specific accounts or research on child abuse for the period is hard to find, sexual abuse may be even more so. Today, the concept of sexual abuse receives a lot of press and research attention, mostly in relation to how heinous the crime is considered today. In the 1880s a French physician named Amroise Tardieu tried to bring attention to the victims of sexual abuse, but after he died skeptics alleged many of his reports were made up. Victims of sexual abuse could often face a backlash from their community, although reports did not get much more specific about what exactly the backlash would entail. Additionally, denial, minimization, and rationalization were often opposing factors facing those trying to bring attention to the problem. No account indicates that sexual abuse was perpetuated or accepted as much as physical abuse during the time. Writings that would seem to indicate this are called out by contemporary scholars as attempts to justify the author’s own feelings and behavior. It seems more likely that in an era of intense sexual repression, the idea of recognizing, let alone talking, about such abuse was unthinkable. Additionally, Germany saw the control of major institutions including the state, church, school, and the family. Questioning the authority and practices of a family was most certainly not common.

Regardless, Martha and Ilse’s abuse would have affected their mental state as well as their physical. Being sexually abused often leads to feelings of helplessness and loss of control with ripples that extend much further into a young woman’s life than her sexual identity. This is especially evident in Ilse’s lines from the “Dark I Know Well.” “I don’t scream. Though I know it’s wrong./ I just play along./ I lie there and breathe./ Lie there and breathe…/ I wanna be strong--/ I want the world to find out./ That you’re dreamin’ on me,/ Me and my ‘beauty.’” She wants to be able to speak out, but she’s too busy focusing on getting through the experience. The encounter these lines allude to are also reminiscent of another side effect of adolescent sexual abuse. Those who have been sexually abused by a family member, as seen in Spring Awakening, are more likely to exhibit dissociation. Dissociation is a psychological defense mechanism that can manifest itself as simple daydreams or foggy headedness, but it can also exist in more intense forms of feeling utterly detached from one’s surroundings and friends. There is also research that suggests being abused leads to disruption of cognitive development and learning because all of one’s mental ability is focused on lessening the pain of the abuse. Ilse running away, presumably from her own abuse, is not an uncommon reaction to such a situation. Neither is it that shocking that she alludes to her new relationships having aspects of domestic abuse.

Abuse taking place during puberty, as in Spring Awakening, can have further negative effects. Physical changes to the body exasperate the loss of control the victim already feels. Additionally, as sex only carries negative connotations at this point it can lead to an avoidance of coming to terms with one’s new body. For victims of sexual abuse the new sexual discoveries that all the children in Spring Awakening are experiencing would be significantly more complicated and painful. Another modern consequence of sexual abuse during puberty is the loss of a support system during this critical period of life. However, the text of Spring Awakening suggests that this lack of a support system exists for all the children going through puberty in the 19th century. After all, Frau Bergman will talk about Wendla being in “bloom,” but she will not talk to her daughter about what this means.

Beyond the devastating reality of children being hurt, those who are abused are more likely to experience teen pregnancy, be arrested as a juvenile, or use alcohol and drugs. It is significantly likely there will be women in the audience who have gone through experiences similar to Martha and Ilse. Spring Awakening provides an opportunity for these women, and men, to be able to see their own experiences reflected on the stage. Spring Awakening is about the painful transition from being a child. With 1 in 4 girls ( and 1 in 6 boys) being the victim of sexual abuse, it is important to represent this statistic in an honest and human way, and obviously the writers of the musical agreed as sexual abuse was not mentioned in the original text. The abuse of Martha and Ilse gives audience members who have gone through similar circumstances characters who represent their own journey through adolescence, whenever that journey may have occurred.