"I don't know what I've lost." Moritz
"Then seeking won't help you." Ilse
(Wedekind The Awakening of Spring) 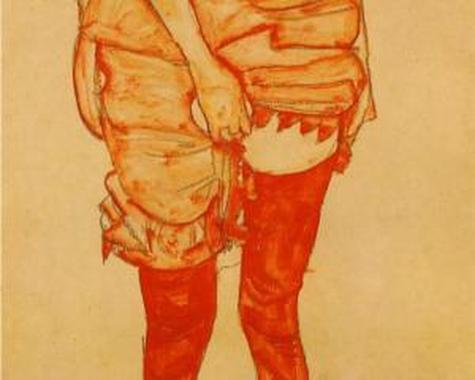 Schiele's Standing Woman in Red
"When I think back on this period it seems like a rich and happy time, but youth is too restless to be happy and in many diary entries and letters there is much written about wounds and scars. But people often deceive each other and I have the very girlish feeling that everything was not yet real life. Sometimes I felt like I was sitting in a waiting room." Elly Heuss-Knapp (1881-1950)

One day you’re sitting in a classroom with twenty people for 7-hours, going out for recess and trading slap bracelets and Pokemon cards like they’re currency. As if overnight, everything changes. You’re supposed to be watching MTV and R-rated movies instead of Sunday morning cartoons. Your body is different, and in many ways your worst enemy, making you feel even more awkward and out of place. Being a teen sucks. Pop culture has even banked in on this with shows like Buffy the Vampire Slayer depicting teens going about their normal trials and tribulations literally on top of hell. We have books such as the Catcher in the Rye and the Perks of Being a Wallflower that allow us to wallow in the truth of teen angst. We can take comfort in the fact that even when feeling absolutely alone, there is someone else out there that gets it. Today, the teen years may not be well loved, but they are accepted. And they are sure catered to in marketing and advertising. None of this changes the fact that it’s still confusing to make that transition into being a teenager. Every teenager has felt like they were back in the 19th century figuring it all out for the first time with no help or support.

At the time of Spring Awakening, adolescence was new. Previously, a person was either a child or an adult, hence the subtitle on Wedekind’s original play reads “a Children’s Tragedy.” Adolescents were forced to inhabit a weird limbo in which they were told to grow-up, but also kept from participating in adult life. As Melchoir sings “…It’s/ cold in these bones of a man and a child./ And there’s no one who knows, and there’s nowhere to go/ There’s no one to see who can see to my soul.” He is trying to understand his place in the world, and he’s sure that no one understands him. These are the feelings of an adolescent during this time that transcend one time period or place. This in-between place is explored from the opening moments of Spring Awakening when Wendla wants to stay in the clothes of her childhood, and does not understand why this wish would be considered inappropriate in any way. Her body is that of an adult, but she is also still a child in many ways and she’s not yet ready to wear the clothes of an adult. Adolescence today is still a period of confusion and high emotions, a time in which many are finding themselves. The adolescents of Spring Awakening were attempting similar things. Unfortunately, the strength of the patriarchal family, harsh schools, and religion led to ever increasing turmoil for teens at the time. The child was at the whim of the parents often leaving them feeling helpless, isolated, and in some cases suicidal.

One was considered a child as long as he or she was in school. Therefore, middle class children, like those in Spring Awakening, were considered children for longer than their lower class counterparts. The final exam of secondary school was often called a “maturity exam” for this reason. Previously adolescence, as defined by a longer period of dependence and extended education, had been reserved for the wealthy. A number of factors contributed to the development of adolescence as a more widespread stage of life. The first major factor was the Industrial Revolution and the growing power of the middle class. The 19th century began to see middle class children excluded from labor, and their time spent in school increased. Puberty also began to hit adolescents earlier. On average, menstruation began as much as fourth months earlier every decade.

In the era of Spring Awakening, according to Neuman, children were treated as “weak creatures who had to be shielded from adult sinfulness, whose moral weakness had to be overcome through schooling.” Many beliefs supported this, asserting that a child is naturally wicked, and that education functions as a tool of correction. Today it is generally accepted that the teen years are spent developing a personal identity and gaining independence. This was impossible in the world of Spring Awakening between the combination of controlling parents and organizations attempting to keep teens inside the already established lines. This led to a multitude of reactions. Some teens, like Melchoir, acted out, attempting to gain their independence despite all the forces of opposition. Others, like Moritz, caved, unable to live in a world where they were constantly defined by the expectations of others, expectations they could never quite reach.

As adolescence became more established stage of life, it began to get more attention and exploration. Salinger and Chbosky still may have been a long way off, but novels from authors such as Mann, Hesse, and Musil all explore the “turmoil” associated with adolescence. Of the many women who recalled their adolescence at the time, none of them remembered their period of puberty particularly fondly. The rule of the parents was absolute. Germans had a great respect for authority, and children and adolescents were subject to the authority of the elder generations. This created a lot of tension between authority figures and adolescents, a relationship that can be seen in Spring Awakening through relationships like that of Melchoir with his teachers. However, this antipathy did not exist for everyone. At the time, interference in a child’s life was seen as a way to protect them. Parents that held complete control over their children would not have considered it a cause for disdain. Rather, they would have felt they were caring for their children and protecting them from a corrupt world.

Spring Awakening manages to take an already grim stage of life and paint it, in a very Expressionist manner, even darker. The children of Spring Awakening were facing all of the same problems as children today. They were experiencing pressure to perform well in school, being told that their performance in the classroom could very well decide the rest of their lives. This mirrors the ever-increasing pressure to perform well enough in school to get into the best schools, and obtain the best scholarship to be able to fund those schools. They encountered sexual urges and first crushes. Some faced devastating cases of depression or abuse. Unfortunately, while the teens in Spring Awakening were dealing with problems that still exist in the modern world, they were doing so with society pushing back against them. They had no access to information. They were made to feel ashamed of their new bodies and urges. The onslaught of emotions and feelings they were being told at home, in school, and at church were sinful, odious, and wrong surely only increased the anxiety surrounding such developments, especially when they had such little control over their own thoughts. This is almost perfectly portrayed in Moritz when he stumbles into Melchoir’s home after reading his friend’s essay. Moritz is confused and upset because, despite his best efforts and most ardent prayers, he can’t control his thoughts. He would have been conditioned to not only believe the thoughts were wrong, but that something was wrong with him for not being able to control them.

The adolescents of Spring Awakening were shielded from the adult world to an extent that is not seen today. Wendla did not know how babies were made, and she had no access to that information, despite her threat to ask the chimney sweep. Moritz had to learn about his new sexual urges from a friend because too much shame surrounded the idea of asking his parents. In addition to things parent’s kept from their children specifically, like Frau Bergman not informing Wendla how babies are made, there was vast amounts of censorship at the state level as well. While it is common for teens to seek out information from their peer group, the adolescents of Spring Awakening really had no other choice.  They were forced to try and find comfort and knowledge from others just as confused, anxious, and shamed as themselves. The setting of 19th century Germany heightens the confusion that is still present in adolescents.  The generational struggle, the idea that parents and guardians just don’t get it, remains. Spring Awakening serves as a warning that even the best intentions for a child can go horribly wrong. Wendla’s mother thought she was protecting her from the real world by not informing her of the specifics of conception. Instead, she ended up dying from a botched abortion, a fate totally preventable. Moritz’ parents wanted him to succeed and have a good future. Yet, he ended up with no future at all because of all pressure. Melchoir’s mother gave him more reign, but she didn’t really take the time to discuss important things with her son. She asserts “But surely, you boys are now of an age to decide for yourselves what is good for you and what is not.” This statement seems so liberating when compared with the exact opposite parenting styles. But she gives too much freedom. She does not talk to Melchoir about these readings. She refuses to acknowledge that he may have faults, that he still developing and needs guidance. She knows in advance of Moritz’ suicidal thoughts, and alerts no one. Today there are still parents that seem too overbearing, not budging an inch on an issue. There are also parents who seem to allow too much freedom, becoming friend rather than guider. These stories are still relevant.