"Don't make me desperate, child. To tell that to a fourteen-year-old girl! See, I expected that about as much as I did the sun going out. I haven't acted any differently towards you than my dear, good mother did toward me." Frau Bergmann
(Wedekind The Awakening of Spring) 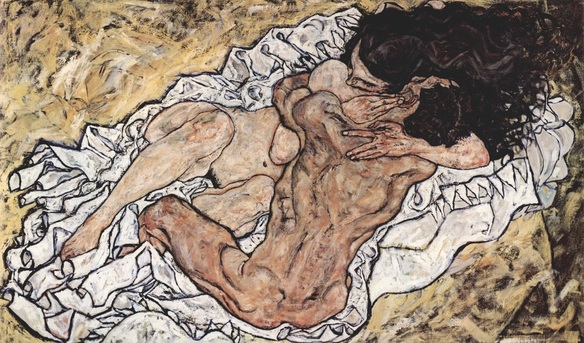 The Embrace (The Loving) by Expressionist artist Egon Schiele
Remember that moment you first became aware of your own sexuality? Maybe it was a gradual thing. Maybe it was a revelation that blindsided you. Regardless, at some point or another, there was a shift. There was a longing, a restlessness that couldn’t be explained by anything. There was intense attraction. There was the realization that pleasure could be obtained in different ways. It was confusing, and exhilarating, and scary as hell. Because how do you approach such a topic? There are the hesitant, or not, initial Internet searches in an attempt to understand and escape awkward conversations. There is experimentation or avoidance. Everything is thrilling, terrifying, and new. The image of sexy may be pushed in the media, for girls and guys, that glorified, fake image of beauty. But it has nothing to do with the actual feelings and confusions of a budding teenager. In fact, it can make one feel more inadequate and insecure in their own budding sexual bodies. And, on top of that, we live in a culture that glorifies sexiness and balks at the idea of sex. After all, a movie will receive a harsher rating for nudity and sex much quicker than for violence. And all of this makes things even more confusing. It can become almost impossible to know where to turn when trying to understand these new urges. In the 19th century these feelings were the same. Except, there was no Internet, and it was more than a matter of avoiding awkward conversations as parents refused to inform their children about the changes they couldn’t understand on their own.

Sex plays an integral role in Spring Awakening. It affects every teen in the show in one way or another. Wendla knows nothing about sex and conception, and eventually pays the price for that ignorance after a botched abortion. Moritz commits suicide partly due to his own confusion about his sexual urges. Otto is sexually attracted to his older piano instructor. Hanschen and Ernst have a homosexual affair. Martha and Ilse are sexually assaulted by men in their families. All of the other children deal with the awakening of their sexuality and accompanying urges as well. Melchoir, although understanding more than most of is classmates, is still ruined by the attitudes toward sexuality—losing both his best friend and significant other.

As if the perpetuation of morality from church leaders was not enough, doctors and scientists began to become the upholders of morality as well. At the time of Spring Awakening it was believed that sexual curiosity in teens was a sign of moral corruption. Frau Bergman not wanting to explain to Wendla how babies are made was not necessarily an act of negligence. Rather, Wendla’s mother may have genuinely believed that the explanation would have corrupted her daughter. Additionally, the middle class in the 19th century was noted for prudery. Parents were guilty of repressing sexuality in themselves as well as their children. Sexual excess, or sex beyond what was necessary for conception, within marriage was not acceptable. Although more open than in the days of Spring Awakening, adolescent sexuality remains a touchy subject today. In recent memory, popular television programs such as Gossip Girl have received major backlash and accusations of glorifying sex to teenagers. Yet society also seems to have accepted that many teens are sexually active. Popular teenage girl magazine Seventeen often provides articles on staying physically and mentally healthy in regards to sexual activity. While parents in the late 19th century denied their adolescents information on sex and attempted to prevent their children from experiencing such feelings, today most parenting websites encourage parents to engage in an active dialogue with their teen about sex.

The private issues and sexualities of adolescents became a big concern for parents, doctors, and teachers. The expression of sexuality was believed to upset the natural order. One way to prevent sexual activity from adolescents was to keep the sexes separated. When Melchoir and Wendla meet in the forest it would have been one of very few opportunities to interact, let alone without supervision. Additional ways to attempt to redirect sexual energies included a campaign to include physical exercise in the school day. It was believed that “nervous unrest, bodily weakness, and psychological depression,” all often commonly used to refer to sexual activity or desires, could be fixed through exercise and a simple lifestyle. All authority figures worked hard to perpetuate the myth of childhood innocence.

The combination of an extremely repressive society and the young ages of the adolescents in Spring Awakening can make it difficult to believe that all of the sex in the play is not an exaggeration. Yet, despite middle class morality in relation to sexuality and vested interest from older generations, students were not celibate. In fact, there are reports that some children searched for sexual opportunities more zealously in reaction to monitoring. The era began to see a rise in venereal disease (syphilis and gonorrhea being reported often), illegitimate children, and other instances of sexual deviance. A study done with university students at the time indicated that 70% lost their virginity in secondary school. That statistic represents 44% of the general population. One student reported that 10-20% of his class engaged in regular sexual activity. This compares to 47.4% of high schoolers surveyed by the CDC in 2011 who admitted to having engaged in sexual intercourse.  Many students began to have sex at approximately 16, although some began as early as 14. These numbers line up with the ages in Spring Awakening. Also like in Spring Awakening, many of these students were ignorant of ways to prevent pregnancy. Even Melchoir’s aggression toward Wendla after she asks to be beaten can be explained by the repression of sexual urges. Pre-Freudian psychology, that Wedekind would have been aware of when penning the original Spring Awakening, linked sexual repression with outbreaks of sadism and masochism. Today, while many teenagers are engaging in sexual activity, it would be incorrect to assert that all adolescents are having sex. Regardless, the topic holds as much fascination today as it did to the adolescents of Spring Awakening. The environment at large may be vastly different in terms of available information, but the time of discovery and sexual awakening can still feel as confusing and clandestine.

Hanschen and Ernst provide a unique challenge within Spring Awakening. They are depicted as having a homosexual affair. Yet, Ernst talks of becoming a preacher and getting married one day, and while Hanschen may attest that Boy Maler is the best in “Bitch of Living,” he also masturbates to the image of a woman during “My Junk.” Yet, oddly enough, these facts may not be so deviant from ideas of homosexuality in the 19th century. While it has been established that people at the time believed masturbation caused mental illness, those in 19th century Germany also believed it could lead to the practice of sodomy. In fact, before the topic was given attention by scholars such as Berlin’s chief medical officer Johann Ludwig Casper, the predominant belief in relation to homosexuality held that male “sodomites” were often oversexed predators who had grown tired of women. Spring Awakening certainly presents Hanschen as a predator, and Steven Sater has said he believes Hanschen has no intention of staying with Ernst. The era attempted to remove all eroticism from friendship, something that might not have been as closely monitored before. After all, when Hanschen mentions Achilles and Perocles, not all versions of the story portray them as lovers.

In the 1850s and 60s Johann Ludwig Casper studied “sexual deviants,” ultimately declaring that homosexuality was how people were born. However, this was the beginning of a new attitude, one that questioned the illegality of homosexuality. In 1857 Ambroise Tardieu described homosexuals as female in appearance and as having diseased bodies as a result of their sexual deviance. Many believed homosexuality was the cause of other illnesses, and even those that didn’t put stock in the idea regarded those who preferred the romantic company of their own sex as different in terms of appearance and carriage. Homosexuality was illegal in Germany. Yet, following Casper’s assertion and the work of others, Homosexualität was included in a German encyclopedia in 1908. The entry speculated that 1.5-2% of the German population was gay.